Git is a powerful tool for helping developers collaborate, organize, and code at their best. But like anything powerful, Git can be confusing and overwhelming. Tobias Günther joins Jen Simmons to explain how to get through the pain points. They talk about branching, team workflows, remote servers, submodules, GUI tools, and more. 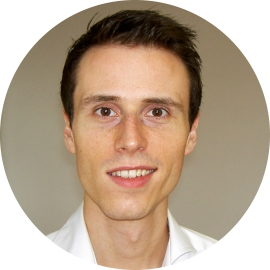 Tobias Günther is CEO and frontend developer at fournova. With his team he develops the Git desktop client Tower for Mac OS X.

I became a better developer by using Git… Git itself, or version control, is not a reason for using it. It has to bring value. That value is, in my opinion, more quality and growing as a developer.

This is The Web Ahead, a weekly conversation about changing technologies and the future of the web. I'm your host Jen Simmons and this is episode 79, I think. Right? Yeah, 79. It's weird, we haven't done... we've only done maybe two episodes in the last four weeks so I feel a little out of practice. But meanwhile I've been obsessing about The Web Ahead actually because I am building, finally, building a website for the show. Hopefully it will be out soon. I'm hoping in the next month to launch it. Maybe even by the end of August 2014. But if not, then early September 2014. So I've been loading up content and looking at old shows and just staring at transcripts and it's been kind of amazing, actually, to realize, 79 shows... [laughs] is a lot of shows, a lot of topics, a lot of good stuff. So I'm really excited to get the website finished and in a place where you can look at it. So I'm going to start talking about it on the show simply because I know a lot of these episodes, people listen much later than when they're first recorded. So perhaps you're listening to this and the website is already out. We're still totally on 5by5, all the shows are still totally there. All the pages on 5by5 are still, all those links will still totally work, the show notes and such. But we're also going to have it over on the new website where there will be a lot more information about guests, about the sponsors, and about eventually, I don't know that I'll launch with this turned on right away, but later I want to have a place where listeners can submit examples of, like, "Oh, look at this awesome WebRTC project I just did or I just found. Let's put that on the WebRTC page." And make it much easier for you to find older shows. Maybe you really want to focus on content strategy and listen to all the shows about content strategy. There will be a page just for that, where all of those shows will live together and you can find them. 'Cause now that we have more and more and more shows, it's... that's a lot of hours. [Laughs] So, maybe you want to be able to sort of focus in on a certain topic or subject or go back and listen to stuff. So that's the idea. But I also wanted to talk about it, bring it up, because there are people who are totally helping make this project happen. And it's happening faster because of their help. So you can go over to, this is going to be just a freaky place, but github.com/jensimmons/thewebahead/issues. I'm just using because, you know, it's here, easy to use, an issue tracker on GitHub to list a bunch of issues that people are helping with. People are totally helping load up content, track down bios for our dozens and dozens and dozens of guests and stuff like that. 'Cause it's taking time and it's making it much faster. So I also wanted to say thank you to Jenn Schlick, who's done so much work transcribing the shows and now also helping put those transcriptions on the website as well as other things. Jason Neel and Matt Sugihara... is that... man, I'm sorry, Matt, I don't know how to pronounce your last name. Sugihara? Phil Jones, Robert Fonó, Ross Penman, have all been really great. And Sean Fitzpatrick, who also knows Drupal, and he's been helping with some of the Drupal. It's all Drupal website built, Drupal backend stuff, he's been helping with some of that, had some great suggestions on some modules I hadn't thought of. So thanks to all of them and to everybody else who's about to start helping out. It's really been fun to work with a team again. Like a little fun volunteer open-source-y type of team.

So enough about the website. Check it out once it's up. And now I have no choice but to finish it. [Laughs] So my guest today is Tobias G﻿ünther﻿, who is gonna explain all the hard stuff for us and make it more understandable. Hi, Tobias.

Thanks to Atlassian's BitBucket for sponsoring the show. To learn more about basic Git commands, advanced Git workflows, and Atlassian's tools that support Git, visit atlassian.com/webahead.

And thanks to Squarespace for supporting the show. Use code JENSENTME for 10% off any purchase.